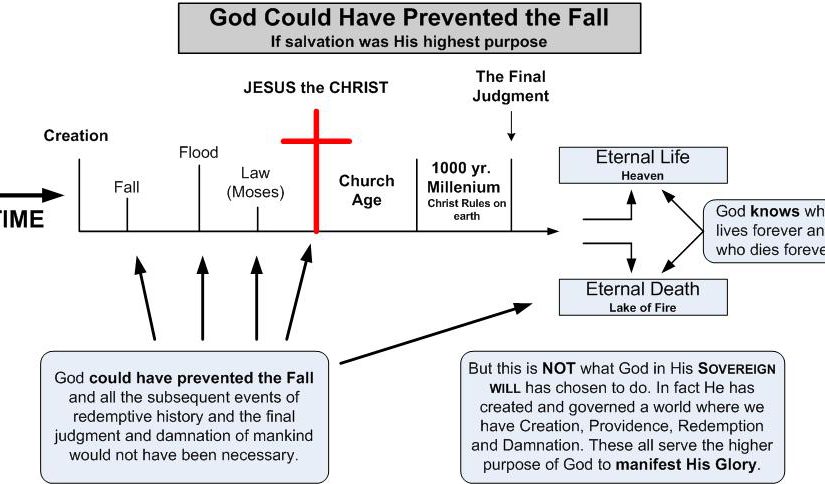 The Sovereignty of God
God’s Purposes
Romans 11:32
For God has shut up all in disobedience that He might show mercy to all.  NASB
God’s highest purpose is NOT the salvation of Mankind
Many people have the mistaken idea that God’s highest purpose is the salvation of men. This is a false idea and foreign to the Bible’s teaching. They reason that since we are created in God’s image and are therefore the pinnacle of God’s creative works, that for mankind to fall into damnation is the worst conceivable idea. But consider that God has ordained the fall of mankind from eternity, for His own Immutable purpose and by His eternal Decree. It was always His purpose for mankind to fall, so that he could redeem some to eternal life and others would be damned. You say, how can you be so sure these are God’s purposes? Well that’s easy, this is “in fact what happens” or to put it another way, it is God’s Sovereign will. It is what unfolds in the course of history therefore it is the outworking of the Sovereign Decree of God. Not only is this reasonably inferred by common sense, but the Bible plainly states that God is responsible for the fall….and has planned redemption from before the world began…
Romans 11:32 – 32 For God has shut up all in disobedience that He might show mercy to all.  NASB
1 Peter 1:20-21 – 20 For He was foreknown before the foundation of the world, but has appeared in these last times for the sake of you NASB
Many also claim that it is God’s will that all men be saved. In this they quote…..

1 Timothy 2:3-6 -3 This is good and acceptable in the sight of God our Savior, 4 who desires all men to be saved and to come to the knowledge of the truth. 5 For there is one God, and one mediator also between God and men, the man Christ Jesus, 6 who gave Himself as a ransom for all, the testimony borne at the proper time. NASB