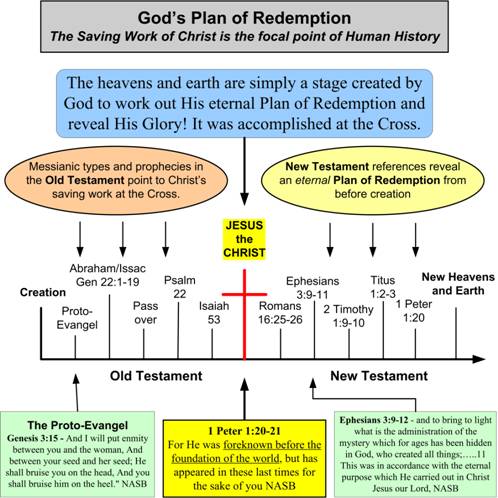 The Cross – The Work of Jesus Christ

this Man, delivered up by the predetermined plan and foreknowledge of God,

you nailed to a cross by the hands of godless men and put Him to death. NASB

The Cross – What Happened There?

In the beginning of our lesson on The Savoir, The Person of Jesus Christ, we discussed the fact that God had created the world to display His glory through His work of Providence in and through History. Further that the Bible is a “unified whole” narrative recording for us the history of God’s work of redemption in the world. This unified whole we refer to as “redemptive history.” That is, the History of Redemption, which is the primary purpose of God in the creation of the world and mankind. Since this Redemption is the main theme of the narrative of the Bible, we find the redeeming work of Jesus Christ and His person, who is the Savior of the world, to be the focal point of all of human history.

Galatians 4:4-5 – 4 But when the fulness of the time came, God sent forth His Son, born of a woman, born under the Law, 5 in order that He might redeem those who were under the Law, that we might receive the adoption as sons. NASB

Jesus Christ is the focus of the entire Bible, both Old and New Testaments. He is the Savoir of the world, and His saving work was accomplished at the Cross of Calvary. Consider then, that in the course of history, God’s purpose to redeem fallen mankind from their sin by sending His Son Jesus Christ into the world to give His life as a “sacrifice” and be raised from the dead, is primary among all the things which God has purposed to do. This is God’s Plan of Redemption!

This Plan of Redemption opens up a whole new understanding for us then concerning God’s activity in directing the events of History. We see then and therefore that Jesus Christ and His atoning work at the Cross become the very focal point of history, and thus the key event in the history of the world, and this by the eternal plans of God Himself. God planned to crucify Jesus on the Cross from before the creation of the world.

Acts 2:22-23 – 22 "Men of Israel, listen to these words: Jesus the Nazarene, a man attested to you by God with miracles and wonders and signs which God performed through Him in your midst, just as you yourselves know, 23 this Man, delivered up by the predetermined plan and foreknowledge of God, you nailed to a cross by the hands of godless men and put Him to death. NASB

So when we think about the Cross of Jesus Christ the Savior, we must understand that He is not just some Galilean peasant in history who did some good things and had some wise teachings, but rather He is God very God, incarnate as a man, accomplishing the primary work of the eternal plans of God which were made before the creation of the world.

1 Peter 1:18-20 – 18 knowing that you were not redeemed with perishable things like silver or gold from your futile way of life inherited from your forefathers, 19 but with precious blood, as of a lamb unblemished and spotless, the blood of Christ. 20 For He was foreknown before the foundation of the world, but has appeared in these last times for the sake of you NASB

Therefore when we consider the Cross of Christ, we must realize that there the perfect plans of the perfect God, plans to save mankind from sin, have found their fulfillment. More than this, that Jesus the Christ is that God Himself, come to earth for this great purpose, to save His people from their sins. And that is exactly what He has done!

Matthew 1:21 – 21 And she will bear a Son; and you shall call His name Jesus, for it is He who will save His people from their sins." NASB

2 Timothy 1:8-10 – 8 Therefore do not be ashamed of the testimony of our Lord, or of me His prisoner; but join with me in suffering for the gospel according to the power of God, 9 who has saved us, and called us with a holy calling, not according to our works, but according to His own purpose and grace which was granted us in Christ Jesus from all eternity, 10 but now has been revealed by the appearing of our Savior Christ Jesus, who abolished death, and brought life and immortality to light through the gospel, NASB

Because the Cross is the fulfillment of God’s plan of redemption, it is absolutely sufficient to accomplish the ends for which God planned it. The redemption that was obtained by God in Christ at the Cross was altogether sublime and magnanimous, it was a display of divine wisdom and love beyond wonder and filled with amazement! The Cross was, as some have said, the blazing center of the Glory of God! It was there that all of the attributes of God become crystal clear for all to see, and that they reach red hot intensity! O Sovereign Love, Oh blessed mercy!

At the Cross divine justice was met and heavenly goodness was poured out like a river! At the Cross God’s wrath has been satisfied and sinners have been cleansed, washed and restored to loving fellowship with God once again! The Cross richly affords all the blessing of God for whom He intended it, and they shall be the recipients of it, for God will see to it.

Titus 3:4-7 – 4 But when the kindness of God our Savior and His love for mankind appeared, 5 He saved us, not on the basis of deeds which we have done in righteousness, but according to His mercy, by the washing of regeneration and renewing by the Holy Spirit, 6 whom He poured out upon us richly through Jesus Christ our Savior, 7 that being justified by His grace we might be made heirs according to the hope of eternal life. NASB

In summary, what happened at the Cross was the main event of God’s redemptive plan was completed. It is an historical event, an objective fact, a reality of paramount importance. At the Cross, Christ died for sinners, in their place, to redeem them from sin. At the Cross, God’s wrath for sin was satisfied by Christ’s sacrifice and this reconciled mankind back to God from whom they had been estranged, for all who will embrace it by faith.

Colossians 1:22 -22 yet He has now reconciled you in His fleshly body through death, in order to present you before Him holy and blameless and beyond reproach NASB

This teaching is a part of a 12 month series called "The Savior, The Cross, and The Gospel" ….

This teaching can be heard on audio here:

If you would like to know how to know Jesus Christ and be ransomed from your sins and receive eternal life…..click here to find out how…..

If you have comments or questions, please do respond to shaansloan@att.net

If you would like to be added or add someone to this email list, just reply with "sign me up" and the address you want it sent to. May the Lord bless you and keep you!

The Lord is the Strength of My Life