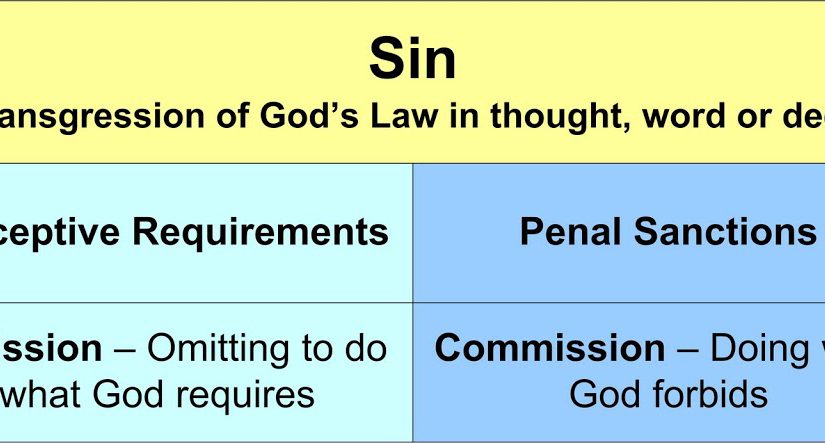 The Gospel – The Message of Jesus Christ
Two Great Benefits – The Death and Life of Christ
Two Terrors of the Law
Mankind is guilty of treason against the highest authority that exists, God Himself. The Bible describes this treason as sin. Sin was first committed by our father Adam and subsequently passed to all his succeeding generations (Romans 5:12-21), having become part of our nature.
Here is a brief and helpful definition of sin from Nelson’s Bible Dictionary….
SIN – Lawlessness (1 John 3:4) or transgression of God’s will, either by omitting to do what God’s law requires or by doing what it forbids. The transgression can occur in thought (1 John 3:15), word (Matt 5:22), or deed (Rom 1:32)…… Sin is not represented in the Bible as the absence of good, or as an illusion that stems from our human limitations. Sin is portrayed as a real and positive evil. Sin is more than unwise, inexpedient, calamitous behavior that produces sorrow and distress. It is rebellion against God’s law-the standard of righteousness (Ps 119:160)…… Since God demands righteousness, sin must be defined in terms of mankind’s relation to God. Sin is thus the faithless rebellion of the creature against the just authority of his Creator. For this reason, breaking God’s law at any point involves transgression at every point (James 2:10). (from Nelson’s Illustrated Bible Dictionary, Copyright © 1986, Thomas Nelson Publishers)
Now in regard to how we have sinned against God by transgressing His holy Law, there are basically two categories of sin that we are guilty of. There are sins of omission, where we fail to do what God has required of us and sins of commission, where we do something God has forbidden us to do. This is because God’s Law has both preceptive requirements and penal sanctions.

Judicially speaking therefore, we are in guilty in both aspects of transgression against the Law, and we have need to be justified before God on both accounts. Even if our sin debt was paid in regard to the penal sanctions, we still would not have fulfilled what God has required of us and therefore our righteousness before God is found lacking. For this great treason against God then, the whole world is accountable to God, having sinned and fallen short of His glory.
Romans 3:19-20, 23 – 19 Now we know that whatever the Law says, it speaks to those who are under the Law, that every mouth may be closed, and all the world may become accountable to God; 20 because by the works of the Law no flesh will be justified in His sight; for through the Law comes the knowledge of sin…. 23 for all have sinned and fall short of the glory of God, NASB
We have transgressed God’s holy Law in every point so that we are subject to the wrath of God (Eph 2:1-3) and the curses of the Law, and the ultimate penalty for sin which is death. It is in this dreadful state that all mankind abide naturally, and this explains the great need for salvation. Mankind needs to be saved from sin and death. It is from this state of sin and death that Jesus Christ saves, to all who call upon Him for salvation, and this salvation is the good news held out in the Gospel.
Romans 6:23 – 23 For the wages of sin is death, but the free gift of God is eternal life in Christ Jesus our Lord. NASB
When someone places faith in Christ, they enter into a state of “justification” before God, which is wholly complete in both aspects of the Law. Through faith in Christ people can be declared just or righteous in the sight of God.
Substitutionary Atonement and Imputed Righteousness
Now this is the great good news that is the substance of the Gospel in its most basic form. That is, that all who believe in Christ, can be justified before God, not by any merit of their own (or works of the Law), but by faith in Jesus Christ ONLY.
Galatians 2:16 – 16 nevertheless knowing that a man is not justified by the works of the Law but through faith in Christ Jesus, even we have believed in Christ Jesus, that we may be justified by faith in Christ, and not by the works of the Law; since by the works of the Law shall no flesh be justified. NASB
This is called “justification by faith.” This “justification” is a declarative act on God’s part toward us on the basis of what Jesus Christ has accomplished in His life and death. When we trust in Christ, we are declared righteous by God because of Christ’s merit. Christ’s merit is wholly complete before God because He paid the penal sanctions of the Law in His death, and He fulfilled the preceptive requirements of the Law in His life, having perfectly carried out all of God’s precepts in His lifetime. He never omitted to do what God had required and He never did anything that was forbidden by God. Therefore, on this basis, God’s Law has been fulfilled in Christ, and God offers this “justification” to all who have faith in Christ.
Romans 3:21-24 – 21 But now apart from the Law the righteousness of God has been manifested, being witnessed by the Law and the Prophets, 22 even the righteousness of God through faith in Jesus Christ for all those who believe; for there is no distinction; 23 for all have sinned and fall short of the glory of God, 24 being justified as a gift by His grace through the redemption which is in Christ Jesus; NASB
Jesus Christ paid the penalty of sins by dying as a sacrifice in our place. This is called “substitutionary atonement,” as discussed earlier in our lesson pages 39-50. This atonement was pictured in the Old Testament “sacrifice.” Therefore, Christ is our “sacrifice,” our Passover lamb that died “vicariously” (for us) and as a “substitute” (in our place), ref pg 45. Therefore Christ died as a “substitute,” a “sacrifice” to pay the debt of death which was owing to God because of our sins. God reckons Christ’s payment of death to us through faith and on this basis cancels the debt we owed because of the Law’s penal sanctions.
Colossians 2:13-14 – 13 And when you were dead in your transgressions and the uncircumcision of your flesh, He made you alive together with Him, having forgiven us all our transgressions, 14 having canceled out the certificate of debt consisting of decrees against us and which was hostile to us; and He has taken it out of the way, having nailed it to the cross. NASB
Colossians 1:21-22 – 22 But now he has reconciled you by Christ’s physical body through death to present you holy in his sight, without blemish and free from accusation-
In the same way, God reckons to us the perfectly righteous life of Christ through faith, so that in Christ God sees us as having fulfilled all the preceptive requirements of the Law as well. This is called “imputation.” Christ’s perfect life is credited to those who have faith in Him.
Philippians 3:9-10 – 9 and may be found in Him, not having a righteousness of my own derived from the Law, but that which is through faith in Christ, the righteousness which comes from God on the basis of faith, NASB
Romans 4:5-6 – 5 But to the one who does not work, but believes in Him who justifies the ungodly, his faith is reckoned as righteousness, NASB
These then are the two great benefits of the Gospel. Both the life and the death of Christ are reckoned to us by faith, fulfilling God’s righteousness wholly and completely for us! In the Gospel therefore we not only proclaim that Christ died for us, but that He also lived for us!